The Beginning… and the Middle… of the End of My Relationship

Well, Mona broke my glasses the other day. It was all in good fun, she went to straddle me and accidentally knocked into my glasses with her arm.

An arm of the glasses bent up, which is pretty standard damage.  But two pieces on the frame separated.

It was a Sunday by her place.  We went to an optician. Diagnosis? “They’re broke.  Go to a jeweler.”

We went to a jeweler, they could be welded but they’re bent and should be unbent first. So I decided to take them to the optician where I got them during the week.”I’ll pay for them,” Mona offered, since she broke them.

She texted, yes texted that it bothered her that I would take her money. 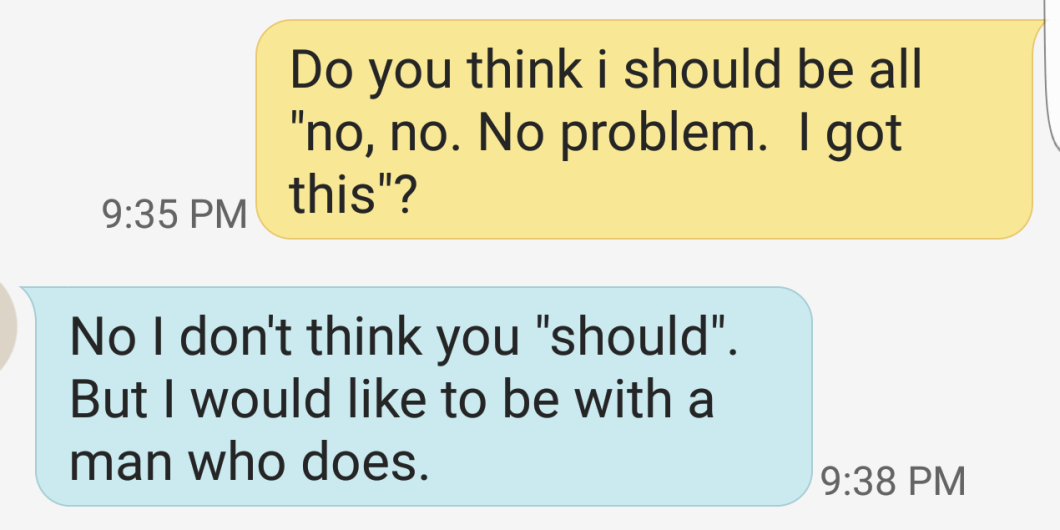 Ok, well… I’m $16k in debt, working a second job pounding the pavement for 5 hours at a time as I take pictures of real estate. I’m eating eggs because they’re cheap, turning down dinners with friends. Cut me some slack.  Actually, I said that:

Now, ladies. If you caused $80 damage to your bf’s glasses, is it out of line for him to take it from you? If we were married it would all be OURS anyway, but we’re not married. Should I have just covered it.”Be the man” as they say?

She threw it back it my face, of course, that my situation is affecting her too. That because of it we can’t proceed with things in our relationship. I can totally understand that. In her opinion, I can’t meet the kids until I’m out of debt which won’t be for ten months or so. She wants to travel, likes the occasional fancy meal, Broadway plays. She needs a financial peer or somewhat near that.

Then after we both vented, it got eerily quiet. Mind you, we were texting this entire time. Ugh. But if I’m in a financial situation for a year and she can’t accept it, there’s only one thing to do:

Now, at almost two years, we can’t break up on text. And neither one of us were insisting to talk on the phone. Normally, if we’re fighting I’d give the ol’ “let’s talk on the phone, I don’t want us to go to bed angry.” But we weren’t angry anymore.

We’re DONE. In my eyes, anyway. The writing is on the wall. And we weren’t ready to do it.

Now here’s the kicker… we scheduled to have a couples session tomorrow with the therapist whom we see individually. We WERE going to go back to her place then have Valentine’s plans on Saturday. Now, I don’t know of we’re going to the therapist tomorrow or doing Valentine’s at all. Probably not. Part of me thinks it’ll be almost fun to go in, start the therapy session, address this, break up in 10 minutes and leave.

But honestly, I can’t see this going past tomorrow. There’s no way my relationship survives the weekend. It’s sad.

Worth noting… we haven’t had advanced cuddling in a month… or even kissed because of sicknesses, cold sores, her period, lack of time together. So her oxytocin snd dopamine levels are dry. I’m not saying that this is the only cause of her doubts in our relationship, but I absolutely think that it plays a part. Lack of sex can cause stress, frustration and anxiety.

I’ll let you know how it goes. I know some readers have been in from the beginning and have responded negatively when I’ve written about our arguments, thinking that I’m putting up with too much.