Ok so as I mentioned yesterday, I made cavatelli for dinner at my first cousin, once removed “Daniela” (dad’s first cousin)’s house for Palm Sunday dinner.

I had not realized that it was not to be a side dish,  but the main course.  Good thing I made enough. It was a big hit, as always.

It was a ton of fun anyway.  We didn’t just eat and end it. We ate and just hung out at the table and talked about other family members,  catching up, telling random stories based on common topics.

Daniela’s son “Dave” was there too. He’s 7 years younger than I am but we never really bonded. We even just shake hands when greeting/saying goodbye. He’s not a warm fellow, but it was still great talking with him.

And Daniela had me sit at the head of the table.  To me, traditionally,  that’s always been the head of the family spot. Obviously, I’m not the head of her family, and she didn’t really care if I sat there. But for me, it gave me a brief feeling, in a way, of having a family of my own, being a patriarch. It was nice.

Someday, hopefully in the not-too-distant future.

And again, people brought pastries for dessert. I just couldn’t say no and make it a waste. Oh well. Back to the cleanse tomorrow.

But here’s the St Joseph’s pastry that I had half of: 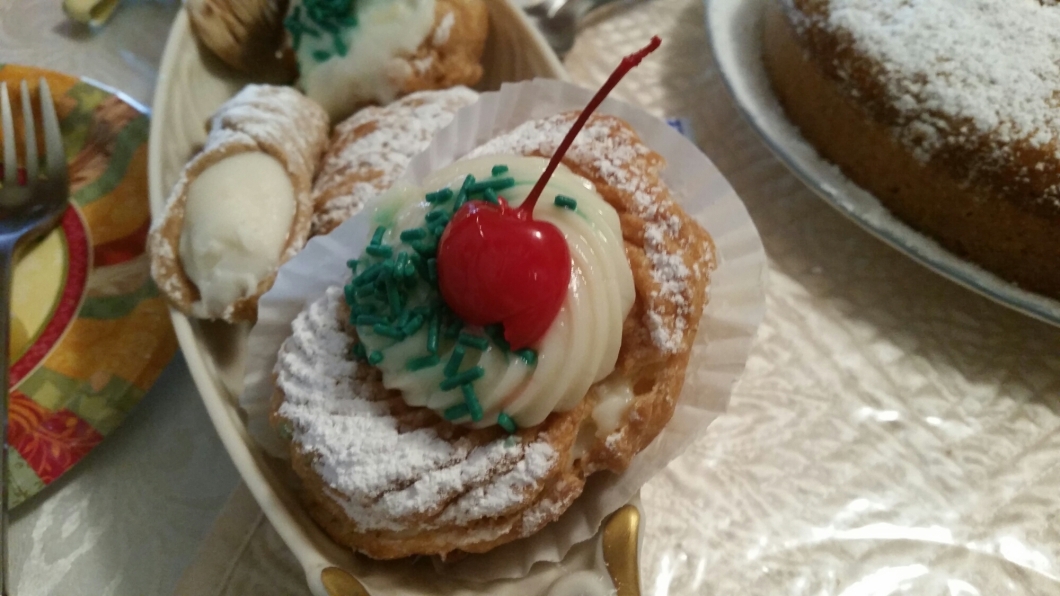 Then coming home I spoke to my first cousin “Celeste.” She’s 11 months older than I am. We were close growing up. She’s divorced now with a couple of boys. Nice to have that relationship back, as we haven’t really spoken a lot within the past 10 years as life had just taken us apart.

Her mom/my aunt/godmother won’t be around for Easter but I’ll go over Celeste’s house anyway.  She’s wants to learn how to make cavatelli with her boys. More carbs. Ok… if I must. AND we’ll make meatballs too, first time for me. Looking forward to it.

Note about the word “cugin” in this blog post’s title.  Cugin means “cousin” in Italian. But growing up in the 70’s and 80s in an Italian American neighborhood in Queens, it meant like a cool, slick guy.

But there were also “guidos”, who were made popular by Jersey Shore. They had the same “ay oh” style as cugins, but guidos were more douchebags.

Now that I think about it, a friend used to call himself “the mean cugin.” He wasn’t really mean, definitely a punk though. I suspect he just liked the rhyme. Who am I kidding?  Growing up in that town we all got a little cugin/guido in us.