So I went to the NY Marathon today to cheer on the runners.   I live less than two blocks from the route.  I did it last year.

I brought my portable chair and got a spot on the sidewalk right by a Dunkin Donuts to replenish my warm beverage, oh it was cold and breezy this morning.  Oh it was.  I was sitting a block away from one band situated along the route on one side of me and a block from another band on the other side.  Many others were on the sidelines too.  Very festive.

As people run by, I’d read their shirts, many have names or countries on the shirt.  “Hey Naomi, way to go!”  “Pepe, you can do it!”  “Hey yellow shirt, how you doin?!”  “Tonyyyyyyyyy!”  “Denmark, who’s awesome?  You are!” “Hey France, that way! (pointing in the direction that everyone’s already going)” “Oooooooh, Caaaaaanadaaaaaaaaa!!!!” “VIVA ITALIA!!!!” 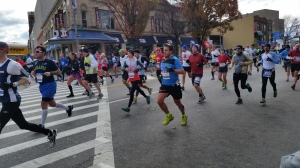 Many people cheered on marathoners too, mainly just “Yeeeeeaaaah!!  Wooooohoooooo!!!”

I think it’s safe to say that I was the most zealous that I heard.  I get like that.  I’d like to say that I did that because I mainly want the marathoners to have a good time and support inside of a grueling event.

But honestly, I just like having an outlet to be wacky.  I rarely let that out.  And since it puts people in good mood, al the more better.

And oh yeah, I was wearing a Santa Claus hat.

And who wouldn’t love to be encouraged and cheered on by a crazy Santa?  You know who?  Zombies.  That’s who.

Everyone passing smiled, laughed, waved or gave me a high five, very appreciative of the support.  It probably helped that it was at Mile 3 when everyone was still perky and not Mile 23.

Yeah, I think I’ll do that every year that I live near a marathon.

(And you… do you follow my blog? Go ahead.  Take a chance)